Mikes To Be Muted In US Presidential Debate To Stop Interruptions 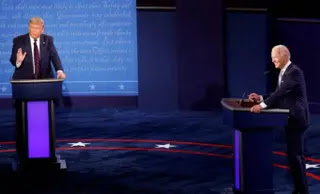 The US Commission on Presidential Debates, on monday announced they will mute the microphones of President Donald Trump and his Democratic rival Joe Biden when they are not answering questions during their final showdown, to avoid the interruptions that disrupted their last debate.

Each candidate will be allotted two minutes to answer the moderator’s questions, during which time the other man’s mic will be shut off.

Once they both have had their two minutes, there will be open discussion, and neither mic will be muted.

“It is the hope of the Commission that the candidates will be respectful of each other’s time, which will advance civil discourse for the benefit of the viewing public,” the Commission said in a statement.

“President Trump is committed to debating Joe Biden regardless of last minute rule changes from the biased commission in their latest attempt to provide advantage to their favored candidate,” he said in a statement.

Stepien said Trump was planning to raise a number of allegations regarding Biden’s son Hunter — all of which are unsubstantiated. The president’s pursuit of such claims in Ukraine led to his impeachment by the House of Representatives earlier this year.

“If the media won’t ask Joe Biden these questions, the President will, and there will be no escape for Biden,” Stepien said

The two candidates were supposed to have held a second debate last Thursday, but the commission changed the rules to allow an online debate format after the president tested positive for the coronavirus. Trump then pulled out of the debate, and the two men held rival town meetings on different television channels.

Thursday’s debate will be the last time the two rivals face off before the November 3 election.