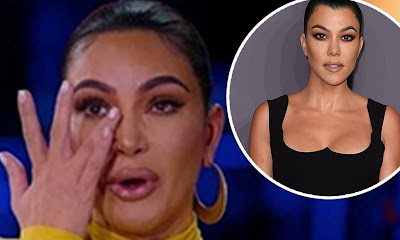 Kim Kardashian broke down in tears as she recalled the aftermath of being robbed in Paris and that she feared that her sister Kourtney would find her dead.

The reality star admitted that the robbery in Paris in 2016 had a devastating effect on her and that she worried that Kourtney was going to find her dead after intruders broke into her hotel room.

Kim said that she had "packed all my jewellery" for Paris Fashion Week that year, which was something she had "never done before."


The KKW Beauty founder said that while she stayed in the hotel room, Kourtney had headed out with the only security guard that they had.

Kim recalled that around 3am, she heard "stomping up the stairs" and that made her feel "immediate panic" as she believed "someone was there to get me".

She said that the intruders burst into her room after she tried calling 911. They demanded that she handed over a ring that her husband Kanye West had gifted her just a few days previously.

Kim broke down in tears as she recalled the moment that one of the robbers "grabbed her" while she was n,a.k.e.d under a robe, as she feared that she would be assaulted.

The KUWTK star said: "I was like, ‘OK, this is the time I’m gonna get raped. Like deal, this is gonna happen, just prepare yourself.'

"So, I did and then — I don’t know why I’m crying, I’ve talked about this before — and then he tied me up with handcuffs and zip-ties and then duct tape and duct-taped my mouth and my eyes.”

Kim said that a gun was then pointed at her and she feared that Kourtney would return and put herself in danger.

The robbery made Kim "really paranoid" for about a year and her home had "half a dozen" security guards outside during that time.

It was only after the robbers were arrested that Kim discovered that they had been following her "for two years leading up until this moment" and had already tried to attack her previously but Kanye had been with her.

"There was a whole team of people that had planned this."