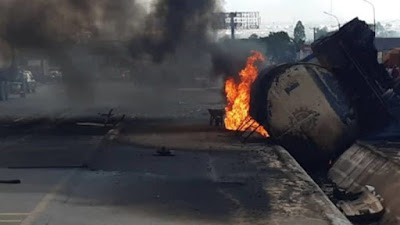 Six persons have been killed in a tanker explosion at Lapai in Lapai Local Government Area of Niger State.

The incident happened in the early hours of Tuesday when two tankers collided before exploding in the state.

This was confirmed to Channels Television by the Director-General of the State Emergency Management Agency, Ahmed Inga via the telephone.

Mr Inga said at the time of filing the report he and his men were on their way to Lapai.


Those injured in the explosion are said to have been taken to various hospitals in the local government area.

Six tankers and yet-to-be-identified number of smaller vehicles have also been razed by fire.