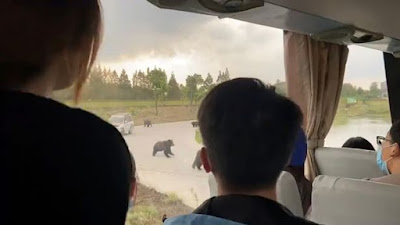 A bear mauled a zoo worker to death in front of a packed tourist bus at a brown bear exhibit at the Shanghai Wildlife Park.

The accident occurred at the wildlife park on Saturday in the zoo’s "wild beast area."

In the area, bears are allowed to roam free as tourists watch on from the safety of a bus.

One worker had reportedly left the confines of the bus, and was savaged by a bear while on duty.


Park officials have expressed condolences to the worker's family, and said it was "extremely distressed such a tragedy occurred."

The incident was caught on video and has been circulated on China’s social media platform Weibo.

In the video, tourists can be seen yelling from inside the bus, with several of the animals seen gathered outside.

A man can be heard exclaiming "there's someone there," and another is heard asking "what's going on" in the clip.

From a different bus, several bears can be seen crowding the bus in question, standing up to its railings.

Shanghai Wildlife Park has since promised to strengthen its safety operations and said it would "do our best to handle the aftermath of the incident."

It has since closed the Wildlife Park and refunded tickets for all visitors who expected to visit during the period of closure.

It is rare for zoo workers in China to be mauled to death by animals, but attacks are not entirely uncommon.