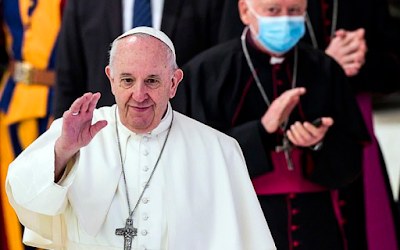 Pope Francis has endorsed same-s.e.x civil unions, saying in a documentary that homosexual people are 'children of God' and that they 'have the right to be in a family'.

His approval came midway through a feature-length film, titled Francesco, which had its premiere at the Rome Film Festival this week.

The film delves into issues Francis cares about most, including the environment, poverty, migration, racial and income inequality, and the people most affected by discrimination.

'Homosexual people have the right to be in a family. They are children of God. Nobody should be thrown out or be made miserable over it,' the 83-year-old said in one of his sit-down interviews for the film.


'What we have to have is a civil union law; that way they are legally covered.'

He added that he 'stood up for that' in an apparent reference to his time as archbishop of Buenos Aires when he opposed legislation to approve same sex marriages but supported some kind of legal protection for the rights of gay couples.

The Pope's remarks will come as a shock to millions of Roman Catholics who have long followed the doctrine that gay relationships are sinful and accepted the Church's stand against the worldwide advance of gay rights.

It also instructs that homosexuals should be treated with dignity.

Francis himself had opposed legislation to approve same-sex marriages in Argentina when he was Archbishop of Buenos Aires a decade ago - but had supported some kind of legal protection for the rights of gay couples at the time.

However, shortly after becoming Pope, he said of gay people that 'we must be brothers'.

He added: 'If a person is gay and seeks God and has goodwill, who am I to judge him?'