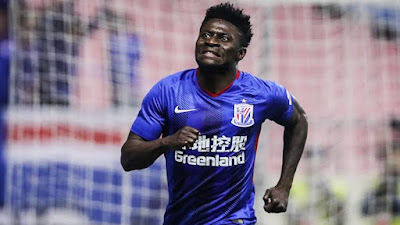 Striker Obafemi Martins ended his two-year goal drought as Wuhan Zall played a 1-1 draw with Henan Jianye at the Dongxihu Sports Centre in the Chinese Super League play-offs on Friday.

Martins scored his first goal since March 2018, after coming off the bench in the 57th minute to net a stoppage-time equaliser as the home side avoided defeat.

Wang Shangyuan’s 25th-minute opener had given Henan Jianye an early lead before Martins,35, combined with Ivoirian Jean Kouassi to salvage a point.

The strike ended Martins’ 31-month goal jinx, after he grabbed a hat-trick for Shanghai Shenhua in a 4-2 win over Hebei CFCC in March 2018.

Martins has now scored a total of 20 goals in 48 appearances in the Chinese Super League, since he first arrived in the Asian country from Major League Soccer club Seattle Sounders in 2016.