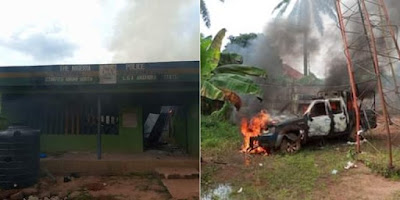 Four more police stations have been reportedly burnt down in Anambra State, while a Divisional Police Officer and a station officer were also reportedly killed by rampaging youths.

The burning and killing of the policemen happened on Friday, even while the curfew imposed by the State governor, Chief Willie Obiano was still on.

Reports said that police divisions in Amichi, Osumeyi, Ezinifite and Ukpor, all in Nnewi South Local Government Areas were burnt, while the DPO of Osumenyi and two others were fatally wounded in the process, resulting in his death and the death of one other.

This was confirmed by the Anambra State Police Command’s PRO, SP Haruna Mohammed.


Mohammed said, “On the 23/10/2020 between 8:30am and 6:30pm hoodlums in large number under the guise of “END SARS” protesters attacked Amichi, Osumeyi, Ezinifite and Ukpor Divisions all under Nnewi South LGA of Anambra State. Suspects also attacked Oraifite Area Command/ Division, vandalized and set the facilities ablaze carting away exhibits but NOT Arms and ammunition.

“Meanwhile, the DPO Osumeyi Division and two others were fatally wounded during the attack. The injured police officers were rushed to the hospital for medical attention after which the DPO and the Station officer Osumeyi were confirmed dead by the medical Doctor, while the other police Constable is responding to treatment. Corpses photographed and deposited at the morgue for autopsy.”

He added that, “Consequently, the hoodlums equally torched part of Awgbu Division but were later repelled by the police in collaboration with members of the Communities.”

“However, six suspects were arrested in connection with the recent attack on 3-3 Police Station and effort is being intensified to arrest other fleeing perpetrators in order to bring them to book,” he said.