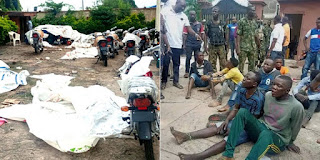 No fewer than seven persons have been arrested in connection with the invasion of Senator Teslim Folarin’s house in Ibadan on Saturday.

Some hoodlums had on Saturday invaded Folarin’s house, carting away items allegedly worth more than N200 million.

Among the items carted away are about 300 motorcycles, deep freezers and food items.

He said that the suspected hoodlums were arrested at the residence of the lawmaker by the Oyo State joint security task force ‘Operation Burst’.

“Most of the equipment had been looted before the arrival of the security men, while seven of them, identified by the residents, were arrested at the scene,” he said.

He said that the empowerment programme was postponed due to the ongoing protest.