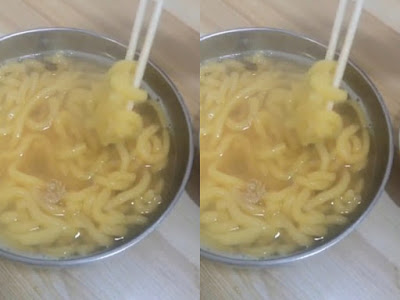 Nine people from the same family have died from food poisoning after eating homemade noodle soup that reportedly had been kept in a freezer for a year.

The Chinese family fell ill within hours after eating Suan Tang Zi, a thick noodle dish made from fermented corn flour, at a breakfast gathering of 12 relatives on the morning of October 5.

Seven of them were pronounced dead on October 10 while the eighth death was declared two days later.

The homemade soup noodle had been kept in a freezer for a year and gone bad before they consumed it, reported Chinese media.

Nine of them who ate the dish fell ill within hours and were rushed to the hospital.

The other three younger family members refused to try the food because of its 'strange taste'.

Among the nine patients, seven of them died on October 10 after all treatment failed. The eighth victim was pronounced dead two days later.

The final surviving family member who ate the soup, a woman known by her surname Li, passed on October 19, according to Chinese media, citing the woman's son.

Chinese officials said in a statement that the nine people had died of food poisoning after finding 'a high concentration of bongkrekic acid' in the noodle soup.

A high concentration of bongkrekic acid, a respiratory toxin, was detected in the noodles as well as the gastric fluid of those who became ill, the notice said.