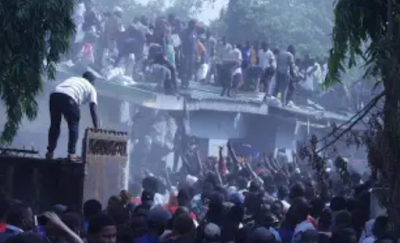 Between the later part of Friday and early part of yesterday when the protests subsided, robbers have continued to operate freely, according to residents.

The protests in Onitsha and environs had turned bloody, last week, as 10 lives were reportedly lost while protesters set no fewer than three police stations ablaze.

Meanwhile, the EndSARS protesters have vowed to continue the protests until their demands were met, warning that the elders must give way for youths to take over leadership.


Reacting to the development, some legal practitioners in Onitsha, Sir Ben Okoko, Sir Anayo Emejue, Ejike Efobi, Maurice Efobi, Sylvester E,ze and Chukwudi Nwokediuko, noted that protests are allowed under the law to express feelings but warned against violence during such protests.

Okoko, Emejue, Efobi, Efobi, Eze and Nwokediuko pleaded with the Federal Government to address the demands of the protesting youths as, according to them, what the youths really need is job assurance, good governance, police reform, security and hope for the future.