Music Teacher Kills Older Girlfriend, Then Himself In Car Accident After Posting About Lockdown Struggles 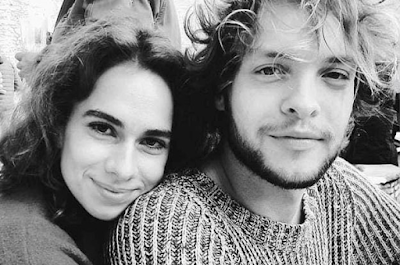 A British music teacher allegedly killed his French partner before taking his own life on a Spanish motorway after posting about his struggles during lockdown.

Caspar Veres died after driving nearly two miles on the wrong side of the highway and smashing head-on into a heavy duty vehicle, before firefighters cut his body out of the twisted metal and recovered the body of Delphine Cochet in the camper van.

An autopsy later revealed that former Leeds University student Caspar, 28, had died in the horror crash but French-born Delphine, 41, had died several hours earlier after suffering a skull fracture.

Veres, a former pupil at the prestigious St Albans School, had filmed himself singing 'I'm starting to feel mean' for a Spanish quarantine song he strummed on his guitar earlier this year.

And in March he posted a 'Coping Calendar' recommending 30 actions to 'Keep calm, stay wise and be kind', including one which said: 'Take five minutes to sit still and breathe.'

Today it also emerged that the music teacher, described as 'free spirited' by an anguished relative, was awaiting trial for assaulting two police officers around seven weeks before the September 25 smash. 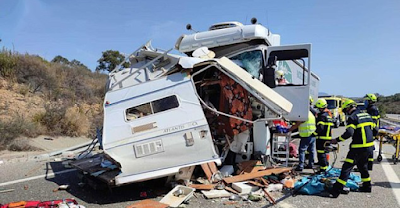 Caspar, originally from Edgware, north London, allegedly went berserk at a Civil Guard station in the fishing village of Barbate near Cadiz on August 6.

The officers spent several weeks off work because of their injuries.

Delphine told cops at the time that Caspar, who turned up at the police station claiming someone was trying to kill him, had not been taking medication for mental health problems thought to include schizophrenia and a bipolar disorder.

Despite the obvious risks he posed, he was released on bail after a court appearance while he awaited trial.

A source at the local Civil Guard association AUGC said officers felt 'frustrated and outraged' to discover he had killed his companion after being released the way he was 'without any security measures in place.'

Delphine has now been named as the 36th person killed in a domestic violence murder this year so far in Spain.