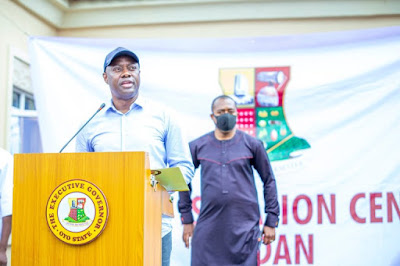 Oyo State Government has issued a warning to hoodlums attacking private and public property in the name of the just-suspended #EndSARS protests, urging them to steer clear of the state.

Commissioner for Information, Culture and Tourism Dr. Wasiu Olatunbosun, made this known while speaking with reporters after an assessment tour of the places attacked by hoodlums during the #EndSARS protests in different parts of Ibadan, the Oyo State capital.


The tour was led by the Director of Operations of the State Joint Anti-Crime Task Force Team codenamed Operation Burst.

Speaking after the tour that lasted about seven hours, Olatubosun said: “We have gone round and I am happy to inform you that everywhere is calm. Business activities have picked up and people have been going out without any harassment.

“But the peace we are witnessing in the state now would not have been possible but for the community engagement of Governor Seyi Makinde, which has helped the state to douse the tension.

“Also, the understanding of our people and the belief they have in the leadership of Governor Makinde also worked in our favour. We also give kudos to our security agencies, especially Operation Burst.

“I appeal to those perpetrators that Oyo State is known to be peaceful, and we will not condone any form of thuggery, hooliganism, violence and looting.”