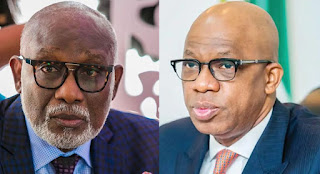 The Ondo State Governor, Mr Rotimi Akeredolu, has described a video that has gone viral, giving quit notice to the Igbo people to leave Yorubaland, as a senseless and one capable of causing destabilisation in country.

A group, Young Yoruba for Freedom, in a viral video had told the people of Igbo extraction residing in the South-West to leave the region.

But the  governor on Sunday while speaking on the violence that characterised the #EndSARS protest in Akure, the Ondo State capital, said, “We strongly condemn the puerile, divisive and revisionist video by one inconsequential individual going viral that has given the Igbos an ultimatum to leave the South West Region.

“This video is not just senseless; it is the product of an agent of destabilisation who does not even mean well for Yorubaland. The Igbo, like every other tribe in the South-West are free to go about their legitimate businesses. They are enjoined to ignore the ultimatum.”

Similarly, the Ogun State Government dissociated itself from the notice to quit.

The government on Sunday in a statement issued by Chief Press Secretary to the state Governor, Kunle Somorin, described the threat by the group led by one Adeyinka Grandson as irresponsible.

The statement read, “As a responsible government, we consider such a pronouncement barbaric, reckless and irresponsible.

“Ogun will remain home to all Nigerians and foreigners, who have legitimate reason to live, work, visit or do business here.

“We shall also protect their lives and properties and look after their wellness, welfare and wellbeing.

“We believe YYF’s position neither represents the views of the Yoruba race that is reputed to be accommodating, tolerant and refined. YYF is definitely not speaking for the Yoruba and the good people of Ogun State.”