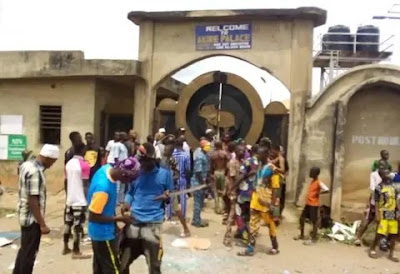 Suspected hoodlums, on Monday, attacked the palace of Akire of Ikire, Oba Olatunde Falabi, in Osun State and held the monarch hostage.

The monarch was later ferried to safety by a team of security men, who dislodged the hoodlums.

The Chairman, Irewole Local Government Area, Ikire, Remilekun Abbas, blamed the incident on the kingship tussle in the town.

He said, “The incident in Ikire is not connected to the #EndSARS matter. It was caused by a kingship tussle. A family is locked in a tussle with the current Akire. The other side involved in the tussle attacked the palace.

“There is no causality. The security men have rescued the monarch. He has been taken out of the palace. Soldiers are on the streets and the situation is calm now.”

The Police Public Relations Officer in the state, Yemisi Opalola, confirmed the attack on the palace.

Opalola said a police Armoured Personnel Carrier was shot at by the hoodlums, who laid siege to the palace.

“But our operatives still managed to rescue the monarch. We have taken him out of the palace. Normalcy has returned to the area,” Opalola added.