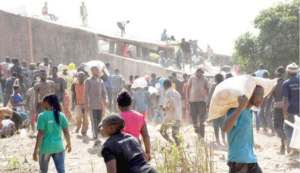 Hours after he escaped from Oko Correctional Centre in Edo state, with other prisoners, a yet to be disclosed Prisoner, has reportedly killed his neighbor who testified against him in court.

About 1,993 prisoners escaped from two correctional facilities in Edo state.

Few have been arrested while about 1,818 prisoners are still on the run and had flooded the streets launching various degrees of attacks.

Addressing newsmen yesterday, Babatunde Kokumo, Edo commissioner of police, said they have arrested 126 suspected criminals and 10 amongst them were escapees.

He has been arrested and he is among the suspects.

“A set of two escapees equally stole a Toyota Camry car. They also met at the correctional centre. They were arrested by Okada Division of Edo State Police Command. We have a total of ten escapees.

“The guns were also recovered from the criminal elements.”