I Thought We Would Have Over 1000 Deaths With The Way Lekki Shooting Was Portrayed On Social Media – Deputy Speaker, Wasiu Sanni Says 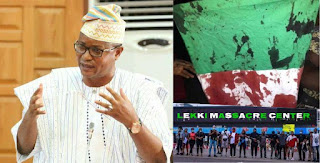 The Deputy Speaker of the Lagos State House of Assembly, Wasiu Sanni has said he thought we would have over 1000 deaths from the October 20th shooting that happened in Lekki.

 According to the lawmaker, the videos that circulated on social media gave him the impression that about one thousand mortality was recorded.

Speaking at a plenary in the house, Wasiu alleged that influencers aggravated and catalyzed the destruction of Lagos state.

Watch the video below …

Deputy Speaker of Lagos House of Assembly, Wasiu Sanni, says social media influencers made the shooting of peaceful #EndSARS protesters in Lekki worse than it was.

"They aggravated and catalysed the destruction of Lagos." pic.twitter.com/FeEHawky0g


Magnificent bezt ! I wish to apprentice whilst

you amend ylur web site, how could i subscribe for a weblog site?

The account aided me a applicable deal. I have been tiny bit familiar of this your broadcast provide bright clear idea