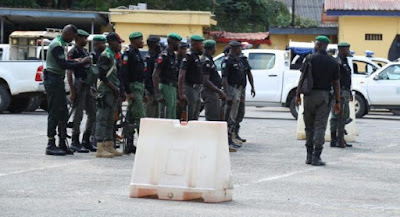 The Inspector General of Police, IGP, Mohammed Adamu has told policemen to defend themselves in the face of physical danger, saying they are also human whose lives must be protected.

Adamu, spoke on Friday during an assessment tour of the Federal Capital Territory Police Command.

He said the unity of this country lies in the support that is given to police officers.

He said if the police are demoralised, the tendency was for criminals to take over the public space.

He said the country relies on policemen to make sure that the public space is not taken over by the criminals.


He said no amount of provocation, no amount of insult would make policemen shy away from their responsibilities.

Adamu said in as much as the police are aware that the government supports them, “we would encourage you to keep performing your duties.

“We would encourage you to be professional, to be civil, but if anybody touches you, if anybody comes to assault you, you can also protect yourself.”