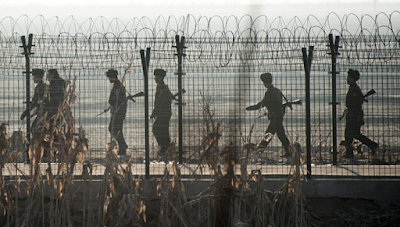 Dozens of North Korean soldiers have been injured by exploding landmines which they were laying on the border with China, a source in the country has said.

The explosion happened while the border guard troops were burying the mines to stop people defecting from North Korea.

A North Korean resident said Kim Jong Un's military authorities 'did not provide sufficient training to the soldiers who were laying the mines'.

Most people fleeing the North escape via China rather than risking the heavily fortified DMZ that leads to South Korea, but both Pyongyang and Beijing have been cracking down on border crossings in recent years.


The North Korean resident who revealed the landmine accident claimed it was the first time in the North's history that mines were being placed on the Chinese border.

'This can only be interpreted as an attempt to completely seal the border and prevent residents from fleeing,' they said.

By contrast, there are known to be millions of landmines near the border with South Korea, some of them left over from the Korean War which ended in stalemate in 1953.

Despite the recent accident, more North Korean soldiers have been assigned to finish the landmine work, the source said.

However, the explosion has left them nervous and uneasy, they said, after military leaders failed to provide proper training.

The explosion occurred in North Hamgyong, the northernmost province in the country, while mines have also allegedly been laid in nearby Ryanggang.

Bridgett w 05:28 Sat, 31 Oct 2020
I simply could not depart your site prior to
suggesting that I really loved the usual information a person provide in your visitors?
Is going to be again continuously to inspect new posts
метан курс web psge метан

Aubrey w 07:53 Sat, 31 Oct 2020
Generally I do not learn article on blogs, however I wish to say that this write-up very pressured me to check out and do it!Your writing tast
has been surprised me. Thanks, quite nice article.
соматотропин website анаболические стероиды