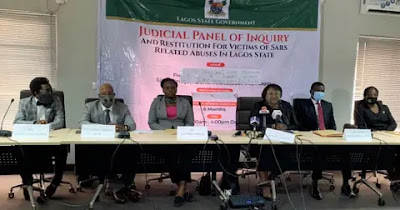 A Couple who were tortured and lost two pregnancies, yesterday narrated their ordeal with the SARS, to the Lagos State Judicial Panel on Restitution for Victims of Special Anti-Robbery Squad SARS Related Abuses and other Matters.

The couple Mr Okuchukwu Obiechina and Mrs Ndubisi Obiechina told the nine-panel that they were awarded N2million, against SARS, by the Federal High court sitting in Lagos, but that it was dismissed by the court of appeal.

Narrating their ordeal in the hands of SARS, Mrs Nububisi Obiechina, a teacher, said they were arrested on June 2, 2017, and were detained for 22 days, in SARS custody.

She said that the incident started when she received a message that she had a parcel from DHL, and later got a call and the person asked her to send him her house or school address after she had told him that she’s is a teacher.


The petitioner said that when she got home, she told her husband who is a businessman of what had happened, then the husband collected the number from her and called it but it was switched off.

Obiechina said after some time, she saw a black jeep, that came to the school and one of them wore a DHL apron and then the person kept calling her while the one on DHL apron was approaching her, adding that when she got close she saw huge men on the jeep and immediately they kidnapped her and started beating her and called her a thief.

The complainant who had no legal representative narrated that she was two months pregnant when they abducted and took her to Ikeja SARS, shrine and started beating her and said they would remove the baby that she would die there and that she should produce the father of the baby that her husband was not the father.

She said, ” At 3 pm, they brought me out I said they should allow me to call my husband so that he would know where I was, I also told them that I have a 5-year-old child in a school that I need to call someone to take the child home, they refused”.

” Later I was allowed to talk to my husband, but the phone was on the loudspeaker, it was oon of the SARS men, Christian that put the phone on speaker, my husband said he had looked for everywhere, that the proprietress told him that some policemen arrested me, it was Christian that told him where I was.” She said

Obechina further stated that the three SARS officers that tortured them are Philip Rilwan, Christian and Harouna Idowu.

” When my husband came to area F, Keeps field, they started beating him and put a tyre on his neck, and said that they will kill him like others that he is a thief. They hit my husband’s head with the butt of a gun and also hit his head with a stone, I was urinating on my body when all the torture was going on”,

“Around 7 pm, they took us to Federal SARS at Ikeja and then gave my husband his phone so he called our pastor and I was also allowed to call a co-teacher friend to help me take care of the child, they said the child should die there.

We spent three weeks in the cell under open roof and rain was beating us, we slept on the floor and as a pregnant woman, I didn’t eat anything, at night they would come and take me upstairs on interrogation, because of the stress and torture, I lost the two months pregnancy.”

“I got pregnant again the second time after we were released so on Sunday, while we were preparing to go to Church, they came again to arrest my husband and Philip Rieninwa, said that the order was from Abba Kyari, I pleaded with them to allow my husband dress up because he was on boxers, but they refused and took him away,”. She said

Obiechina, further said, ” When I couldn’t get through to my husband after one week, then I contacted our lawyer and he said it is getting out of hand so he got an order from the Federal High court that he should be released immediately, and he then wrote to SARS, because of the stress and trauma that I went through, I lost the second pregnancy again.”

” We were awarded the sum of N 2million, by the federal High court because of the brutality and trauma that SARS caused us, but up till now, we have not been given the compensation, we also appealed the judgement but the appeal court dismissed it, nothing has happened since then,” Obiechina said

Mr Okuchukeu Obiechina confirmed the testimony of his wife.

The panel is made up of the Chairman Justice Doris Okuwobi (Rtd), Mr Ebun Adegboruwa (SAN), Mr Taiwo Lakanu, a retired Deputy Inspector-General of Police and a founding member of SARS.

After listening to the complainant’s narration, the Chapman of the Panel Justice Doris Okuwobi said the proceedings has to be adjourned because some members of SARS has been mentioned so there is need to send an invitation to the Commissioner of Police so that the SARS can come and give their own side of the matter.

She adjourned further hearing of the petition to Tuesday, November 10, 2020.

On Monday 26, October the panel had announced that it had 15 petitions, before it, but as at Saturday 31, October 33 petitions, has been received and four cases were called but only two were heard.