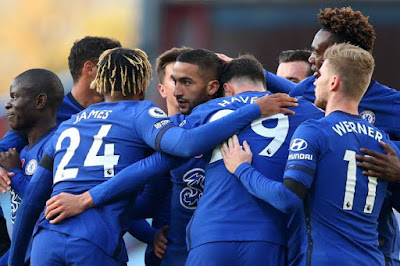 Chelsea got the better of their opponent, Burnley as they recorded another clean sheet and put 3 goals against Sean Dyche’s men.

The match had Chelsea dominate all through with Burnley posing no threat all through the contest.

Ziyech opened scoring for the blues in the 26th minute. He recorded his first goal in his debut premier league games for the blues as the first half ended 1 -0.

The Moroccan’s goal marks him as the first player to score in both of his first two starts for Chelsea in all competitions since Diego Costa in August 2014.

Kurt Zouma doubles the lead for the blues after a thumping header from Mason Mount’s corner. Timo Werner completes Burnley’s demolition after Hakim Ziyech’s pass cuts through Burnley’s defense to find him.

Since the arrival of Chelsea’s new goalkeeper, Edouard Mendy, the blues are yet to concede a goal in the premier league as he records his third consecutive clean sheet for the club.

However, Burnley’s woes continue as they have picked up just one point in their opening six league games this season, their worst ever start to a league season in their history.