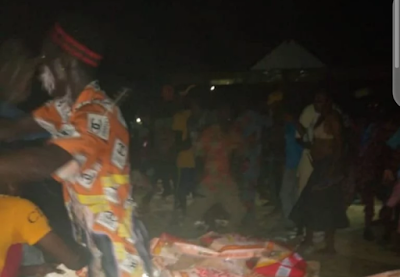 More than 10 persons lost their lives in Ondo State on Saturday night in an accident that occurred in Akungba-Akoko, Akoko South West Local Government of the State.

The accident was caused by a truck loaded with rice, which was said to have suffered brake failure before it rammed into a popular market known as Ibaka in the town.

It was gathered that the truck was coming from the Ikare-Akoko axis before it rammed into the market killing scores.

According to an eyewitness, “the accident occurred when the trailer loaded with bags of rice rammed into the stalls in the market.

Confirming the accident, the Spokesperson of State Police Command, ASP Tee-Leo Ikoro, said about eight persons have been confirmed dead.

“As we speak now eight people have been confirmed dead in the accident and we can still have more because we still have many people trapped under the trailer.”

The Sector Command of the Federal Road Safety Corps was yet to confirm the incident as at press time.

Victims of the accident who sustained various forms of injuries are currently being taken to the hospital by rescue operatives.