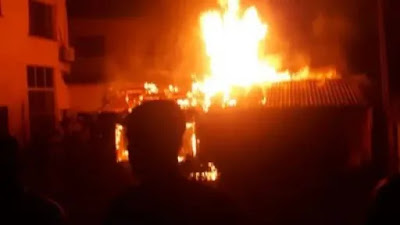 A 40-year-old jealous lover, identified as Etifa Obukulubu, on Saturday in Igbogene area of Yenagoa Local Government Area, the Bayelsa State, allegedly set ablaze the home of his girlfriend over suspicion of cheating.

The deceased, a pastor working with the New Baptist Church and a female assistant were reportedly burnt to death in the fire.

While some residents claimed the burnt house was owned by the targeted girl’s family, others claimed it was rented by the deceased Pastor.

The incident, which occurred at about 3am on Saturday, led to pandemonium as attempt to rescue those inside the building failed.


Dailypost learnt that the exit door out of the house was jammed from outside when the targeted girlfriend, identified as Wilberforce, reportedly vacated her home for the deceased pastor and his assistant who came from outside the state on an evangelical mission.

Residents of Igbogene Community narrated that the suspect, who is a commercial driver, had waited for his girlfriend to come home, “but maybe on sighting her with a man and another girl, he got angry and set the home ablaze.

“He waited for them to enter the house. And use fuel to set fire round the house. But he did not know that his girlfriend had left gone to sleep with another friend.”

Another resident, who described the suspect as a loner, said the incident shocked everyone in the area, “these lovers were staying three houses apart and no one suspected they were dating.

“It is unfortunate that the pastor and his assistant died in the fire. I was told the pastor was invited to preach in Yenagoa and the estranged girlfriend offered her home for them to sleep so for them to leave early.”

Contacted on the development, the Spokesman to the Bayelsa Police Command, confirmed the incident and said investigation is ongoing.