We Can’t Go Back To Class On Empty Stomach — ASUU 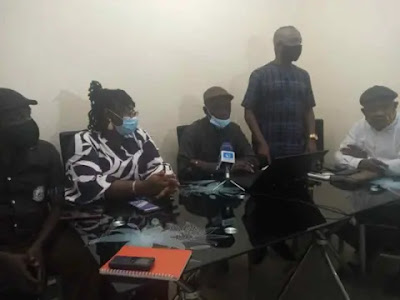 The Academic Staff Union of Universities, ASUU, has disclosed that they cannot go back to the classroom on an empty stomach insisting that the Federal Government should adopt its recently invented payment system for Universities, “University Transparency and Accountability Solution”, UTAS as an alternative to IPPIS.

ASUU also maintained that the Federal government payment system IPPIS, which was made mandatory to university workers, including ASUU members was against the law that granted autonomy to Universities.

The Zonal Coordinator of ASUU, Calabar Zone, Dr. Aniekan Brown disclosed this while briefing newsmen on Monday in Calabar.

The Union described IPPIS as a Cesspool of corruption that can lead to issues of national security due to the “unsafe” nature of the back end office where the database was domiciled in the United States of America.


They added that the integrity of the integrated payroll and personnel information system (IPPIS) was the worse payment platforms describing it as a cesspool for Corruption meant to impoverish university lecturers.

His words: “Our Union has been rejecting this IPPIS since 2013 and the government challenged us to provide an alternative which the union did name UTAS, University Transparency Accountability Solution.

“Because of how IPPIS is operated and because it does not match the peculiarities of Nigerian universities and because the backend and the front end does not really interface, Calabar Zone, insists that IPPIS is a cesspool of corruption.

“It is only attending to issues of payroll and has no control over personnel information, that alone is enough to reduce that platform and make it susceptible to various manipulations and corruption,” he said.

Speaking further, the zonal coordinator maintained that the strike will continue until the federal government comes to its senses and demonstrates a credible commitment to funding of tertiary education to march at par with what is obtainable in other African countries.

Among the demands made by ASUU includes the adoption of the UTAS payment platform, setting up Visitation panels to universities, the release of accrued revitalisation funds for tertiary institutions among others.

“IPPIS is not tamper-proof as presented, it has national security risk being that the server is hosted from outside the country by an American company.”

“We consider the IPPIS which is a payment system offered by the federal government as uncongenial with the modus operandi of the university system, given the peculiarities of universities. Government has made it a front-burner, but we consider it a distraction.”

“We are still in the trenches. And we will not return to the classes with an empty stomach. We seek the cooperation and understanding of the good people of Nigeria, and the general public on ASUU’s stance on the afore-stated outstanding issues and the IPPIS.

“ASUU has courted for itself an enviable pedigree of integrity, credibility, and accountability. Our members would not return to the classes with empty stomachs,” he stated.

He also refuted the figures brandished in some quarters by the government that over 50,000 members of ASUU have voluntarily joined the IPPIS platform in obedience to the federal government directive as against about 14,000 yet to comply.

His words, “That is just a divisive and blackmail tactics. We don’t have a such a number of academic staff members in the country even if you put together both federal and states universities. Maybe they are counting other unions’ members within the university, but we are certainly not up to the figures they are brandishing,” he concluded.