Meet The 3 Nigerian-Americans That Won In The U.S Elections 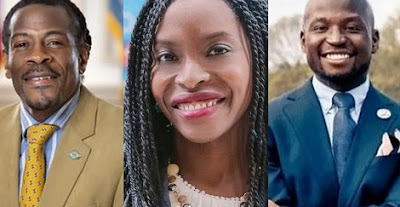 Like we told you yesterday, Ms Agbaje, who contested to represent District 59B in the Minnesota House of Representatives on the platform of the Democratic Party, won with 17,396 votes.

She is one of the nine Nigerian-Americans on the ballot in Tuesday’s election.

Another Nigerian Democrat, Oye Owolewa, was elected as a shadow member of the House of Representatives from the District of Columbia.

Mr Owolewa, who has roots in Kwara and Oyo states, holds a PhD in Pharmacy from the Northeastern University, Boston.

He became the first Nigerian-American to occupy the seat.

As the results trickled on Wednesday morning, Mr Owolewa shared the news of his victory on his social media.

“Good morning. Looks like we did it! I want to thank everyone, from family and close friends to DC residents.

“Because of your contributions and sacrifices, I stand before you as America’s first Nigerian-American congressman.

“In this role, I’m going to fight for DC statehood and bring our values to the lawmaking process. While today is the day for some celebration, the hard work also follows.

“Again, thanks so much for everything. I wouldn’t be here without yall,” he said.

Lastly, Nnamdi Chukwuocha won re-election as a member of Delaware House of Representatives from District 1.