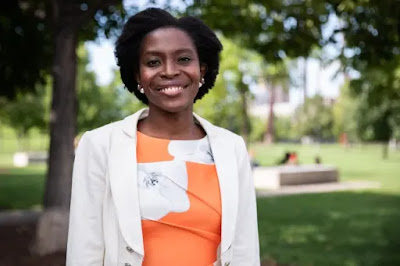 Governor Kayode Fayemi of Ekiti state has congratulated Nigerian-American, Esther Agbaje, for winning a seat at the Minnesota House of Representatives in Tuesday’s US general elections.

Agbaje will be representing District 59B in the 134-member House on the platform of the US Democratic Party after pulling a total of 17,396 votes or 74.7 per cent of the total ballots cast.

Fayemi in a tweet on Thursday, congratulated Agbaje, saying she is a proud Ekiti daughter whose parents are from Aramoko Ekiti.

He wrote: “Congratulations to our Ekiti daughter and Harvard graduate for winning a landmark legislative seat into the Minnesota state assembly. I just spoke to her proud parents from Aramoko Ekiti and extended the best wishes of all our people. JKF”


Agbaje a daughter to Nigerian immigrants was born in St. Paul, the state capital of Minnesota.

Her father Rev. John, an Episcopal Church priest, met her mother Bunmi, a librarian at the University of Minnesota where they were studying.

She graduated from George Washington University, Washington, D.C. with a bachelor’s degree in Political Science.

She holds a master’s degree in Public Administration from the University of Pennsylvania, and also a law degree from Harvard University.

She currently works as an attorney in Minneapolis with a focus on general civil litigation and medical malpractice.

She once served at the US Department of State as a foreign affairs officer, charged with managing rule of law projects in the Middle East.

Congratulations to our Ekiti daughter and Harvard graduate for winning a landmark legislative seat into the Minnesota state assembly. I just spoke to her proud parents from Aramoko Ekiti and extended the best wishes of all our people. JKF pic.twitter.com/kXhfuDdBXI