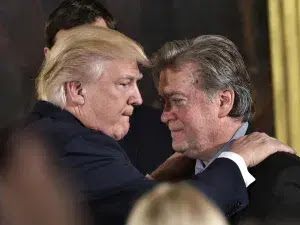 Twitter on said Friday, said it permanently banned an account created by former Donald Trump adviser Steve Bannon which had called for the execution of federal officials during this week’s post-election social media turmoil.

The @WarRoomPandemic account was “permanently suspended for violating the Twitter Rules, specifically our policy on the glorification of violence,” a statement from the social media platform said.

Before the account was blocked, it included a call by Bannon to cut off the heads of FBI director Christopher Wray and top pandemic official Anthony Fauci.

Bannon tweeted that he would “put the heads on pikes” of the officials, in a reference to Tudor-era England as “a warning to federal bureaucrats.”


A video with the same message was also removed from YouTube, according to media reports.

Bannon, a former top Trump strategist, was pushed out of the White House in 2017 after frequent clashes with other officials.

Prosecutors said the online crowdfunding campaign known as “We Build the Wall” raised more than $25 million, which the defendants promised would go towards construction of a southern border barrier but was siphoned off instead.