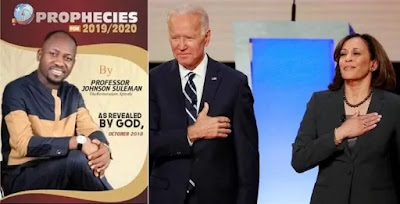 Could Apostle Suleiman's prophesy about the US election be coming to pass?

He prophesied in March 2019 that Trump won’t be re-elected, that his opponent would win, be impeached, and the female Vice President will take over.

Obviously, anyone can predict a president like Trump not Winning second term but he also added his opponent will have a female running mate.


“America should not joke with the next election, because they all will support the opponent of the current president.

The Lord gave me a prophesy last year or so, that Trump would not be re-elected.

Watch the video below…

Apostle Suleman prophesied in March that Trump won’t be re-elected, that his opponent would win, be impeached, and the female Vice President will take over 👀