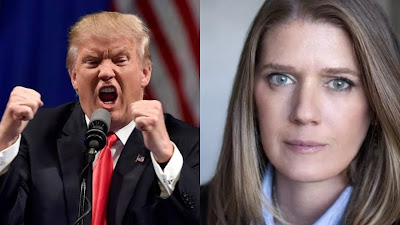 This is how the most colossal and fragile ego on the planet deals with losing the US election: he does not deal with it at all.

My uncle’s speech late on election night wasn’t just entirely mendacious from beginning to end. It was also deeply dangerous. It’s one thing for random Republicans to call a legitimate election into question, but this was the head of the government. The consequences of that action should not be underestimated.

This is what Donald’s going to do: he’s not going to concede, although who cares. What’s worse is he’s not going to engage in the normal activities that guarantee a peaceful transition. All he’s got now is breaking stuff, and he’s going to do that with a vengeance. I’ve always known how cruel he can be. Shortly after the 2016 election, when I’d see him being particularly cruel, I would think about how he treated my father [Fred Trump Jr, Donald’s older brother, who died of alcoholism at 43]. He took away our family health insurance after his father, my grandfather, died – this was when my nephew needed round-the-clock nursing care, which we then couldn’t afford. That is the kind of man he is.


He’ll be having meltdowns upon meltdowns right now. He has never been in a situation like this before. What’s interesting is that Donald has never won anything legitimately in his entire life, but because he has been so enabled by people along the way, he has never lost anything either. He’s the kind of person who thinks that even if you steal and cheat to win, you deserve to win.

But there is some poetic justice here because he has been cheating for months. Now his tactics are coming back to bite him. He told Republicans not to vote by mail and they didn’t, but the result is he has been experiencing this slow drip-drip of disaster over the past few days. Oh, you have these huge margins! Now your margins are shrinking. Oh, Joe Biden’s ahead. Now his margins are growing. It must have been like slow torture, but he set up this failure for himself.

The fact that the Republicans have done better than expected in Congress and the Senate will have made him extraordinarily angry. It means that people were voting against Donald Trump in this election, but not necessarily against this party. That will have added so much salt to his narcissistic wounds.

Also, his supporters are going away. From what I understand, the thing that really ruined his election night was Fox News – his safe zone – calling Arizona days earlier than everyone else. That burst his bubble. Then Twitter was flagging all his posts and deleting them, and other more legitimate news outlets were cutting away from his speeches. But this begs the question: why weren’t they doing this a month ago, or even four years ago, before the last election? It’s good this is happening now because maybe the next two-and-half months won’t be the nightmare we expect, but it’s too late.

I worry about what Donald’s going to do in that time to lash out. He will go as far as he can to delegitimise the new administration, then he’ll pass pardons that will demoralise us, and sign a flurry of executive orders. Remember, he will also still be in charge of the US response to the pandemic. There could be a million Americans dead by then under his watch.

After January, things look bleak for Donald. He has more than $400m of debt coming in the next four years. Why at this point would his lenders cut him any slack? He has never paid anyone back. His businesses are in the tank. He has destroyed his brand.

He is going to be a factor in courtrooms in New York City more than he’s going to be a factor in politics, I think. His secretary of defence has already submitted his resignation, and I think there will be more of that. The Republicans might need him for the January run-offs in Georgia, but he could be considered a liability. If he’s acting like a crazy person, senators are going to keep their distance. People will move away from him if there’s nothing in it for them any more.

As for saying he’ll run in 2024, that’s just a face-saving exercise. It’s a way of distracting him from the fact that he’s probably going to prison. But the worst thing Donald’s looking at isn’t financial difficulties or the prospect of jail. It’s becoming irrelevant. I don’t think he would ever recover from that.