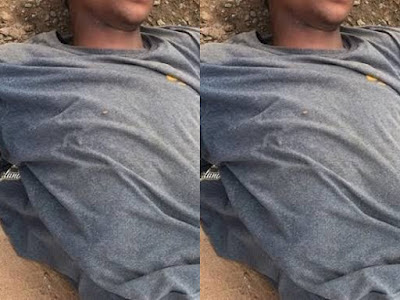 A 42-year-old caretaker, identified as one Mr. Matthew Ahiwe may soon be charged to court in Umuahia, the capital of Abia State to prove his innocence over the allegation that he was responsible for the death one Chigozie Eluwa.

Ahiwe, The Nation correspondent gathered, was arrested at the weekend by the police in Umuahia South Local Government Area of the state.

Ahiwe who was said to have been transferred to the State Criminal Investigation Department (SCID) where he is currently cooling off his feet was accused of allegedly stabbing Eluwa, a mechanic and indigene of Eziama Ubakala in Umuahia South LGA to death in the early hours of Saturday.

A colleague of the deceased mechanic who gave his name as Chigozie Obinna disclosed that Eluwa was reportedly killed at Umuosu community in the same Umuahia LGA.


According to Mr. Obinna (a colleague of the deceased), there has been no love lost between the suspect; Ahiwe and the deceased which sometimes results in bad blood amongst them.

Eluwa was said to have capitalized on the acrimony between him and the co-tenant to issue the deceased a quit notice.

Obinna further stated that before the quit notice, the caretaker had disconnected power supply to late Eluwa’s apartment, a situation he had for long-lived with.

He, however, hinted that the deceased had concluded plans to get another apartment before he was “gruesomely murdered” by the caretaker at the weekend.

A source at the State Police Command Headquarters who confirmed the incident, said the case has been handed over to the State CID for further investigation.

The source said that the command will after investigation charge the suspect to court.