Man Shoots Priest Who Has Been Sleeping With His Wife Twice, But He Survives 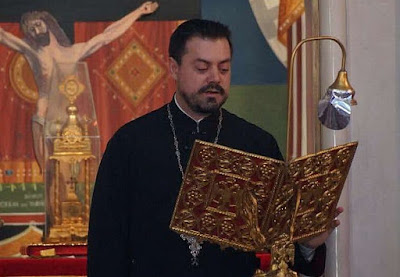 A priest who was shot twice outside his Greek Orthodox Church in Lyon was the victim of an angry husband whose wife he was sleeping with.

Nikolaos Kakavelakis, a 52-year-old father of two, was initially feared to be the latest victim of Islamic terrorism in France after he was attacked with a sawn-off shotgun on October 31.

But Father Kakavelakis has now emerged from a coma and told detectives that the man who attempted to murder him was a love rival.

Nicolas Jacquet, the Lyon Prosecutor, said in a statement that the attacker 'turns out to be the husband of a woman who was having an affair with the victim.'


An investigation for 'attempted murder' has since been launched, and the arrested suspect's wife is also in custody, said the prosecutor.

The attacker has solely been identified as a 40-year-old man of Georgian nationality who lives close to the Greek Orthodox Church in the 7th arrondissement of Lyon.

He has admitted gunning Father Kakavelakis down while he was locking his Church up, and then left the priest for dead.

The suspect ran to his home nearby, and believed he might have got away with the crime, until Father Kakavelakis made a miracle recovery.

Father Kakavelakis, a Greek national who had been a priest in Lyon for the past decade, had resigned from this job a month ago, and was working out a notice period.

The attack on him came two days after three people were murdered in the Notre Dame Roman Catholic Basilica in the southern French city of Nice.