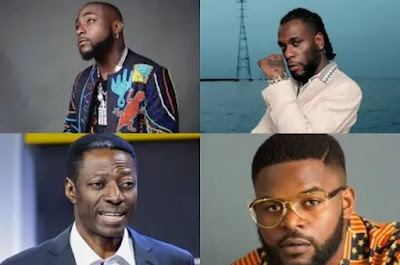 Singers, Davido, Falz and Burna Boy; Pastor Sam Adeyemi and 46 others have been sued by an activist, Kenechukwu Okeke over their roles in #EndSARS protest which led to the destruction of his properties.

Okeke instituted the suit at a Chief Magistrate’s court in Abuja on Monday.

According to him, his propeties were destroyed in the aftermath of #EndSARS protest, saying that the promoters of the protest must be brought to justice.

He said, “I shall instigate a private criminal prosecution against all the alleged perpetrators and coordinators of the #EndSARS riots on Twitter. The nation bled, lives lost, and properties worth billions destroyed as a result of the sheer recklessness of some persons.

“Having initiated criminal proceedings against the #EndSARS riots promoters at exactly 1052hrs WAT, 09/11/2020, we shall ensure that same is diligently prosecuted in the interest of defence, public safety and public order. The Federal Republic of Nigeria is country of laws.”

Okeke, in a supporting affidavit said the defendants played key roles in the #EndSARS protest which later snowballed into violence.

He alleged that the 1st to 50th accused persons between the 3rd day of October 2020 and the 28th day of October 2020, using Twitter, an Internet web source with URLhttps://www.twitter.com within the jurisdiction of this honourable court did conspire among themselves to commit misdemeanour, to wit, promoting and acting in such a manner, with intent to assist in the promotion of #EndSARS and thereby committed an offence punishable under Section 97(2) of the Penal Code Act, C53 Laws of the Federation of Nigeria, 2004.

The affidavit added that the 1st to 50th accused persons with intent to carry out some common purpose, assemble in such a manner or being assembled under the composition of #EndSARS as to cause persons in the Federal Capital Territory, Abuja, to fear on reasonable grounds that such assembly needlessly and without any reasonable occasion may provoke other persons tumultuously to disturb the peace.

It said properties belonging to the complaint were egregiously destroyed by some riotous and tumultuous persons instigated and incited by the 1st to 50th accused persons.