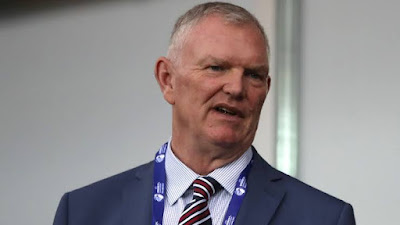 Former Football Association (FA) chairman Greg Clarke has resigned his role as FIFA Vice-President. His resignation comes two days after he left the FA over a series of offensive remarks.

The 63-year-old also stepped down from his position with FIFA after a telephone call with UEFA president Aleksander Ceferin on Thursday morning.

Clarke resigned as FA chairman earlier this week in the wake of referring to black footballers as ‘coloured’ while giving evidence to MPs; Clarke apologized for using the term and added his ‘unacceptable words’ were a ‘disservice to our game’

Clarke has faced so much criticism after his comments.

UEFA in a statement on Thursday announced that president Aleksander Ceferin and Greg Clarke agreed he should step down with immediate effect from his position as a UEFA representative on the FIFA Council.

Similarly, England coach, Gareth Southgate said on Wednesday that Clarke had had “no alternative” but to step down from the FA, while former England Women captain Casey Stoney added the comments were “completely unacceptable”.

Peter McCormick was appointed by the FA as interim chairman following Clarke’s departure as they set to appoint a new chairman by the end of March.