After 10 Years, Man U LIKELY To Bring Cristiano Ronaldo Back 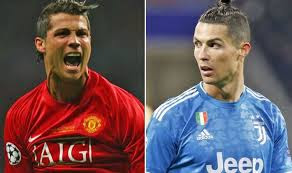 Manchester United have reportedly made their interest in Cristiano Ronaldo known to Juventus and are planning a bid to bring the Portuguese back to Old Trafford more than 10 years after he left to join Real Madrid in a then-world record transfer in 2009.
According to Fox Sports, United have spoken to Ronaldo's agent, Jorge Mendes, during a meeting in Porto and made their position clear: if Ronaldo become available, the Old Trafford board would so everything to sign him.

Any deal would depend on Ronaldo's willingness to return to the Premier League. If the Juventus forward decides on a new challenge next summer, a year before his contract at the Allianz Arena expires, Juventus will not stand in his way.

The Serie A club have their own considerations, not least the need to reduce a massive wage bill. There have been suggestions that Juventus have been pondering an attempt to cash in on the super star next summer while they still can in an attempt to recoup some of the initial €100m they paid to Real Madrid for the player.

Any suitors would probably be invited to start the bidding somewhere in the region of half that fee given that Ronaldo is 35. United are likely to face stiff competition for the Portuguese from PSG if he is made available.

Ronaldo famously joined Manchester United in 2003 after appearing against them in a friendly for Sporting Lisbon. Under the tutelage of Alex Ferguson the Portuguese rose to become one of the finest players in the modern game and Real Madrid shelled out a record €94m for his services in 2009. After smashing Real's scoring records and helping the club to two Ligas, two Copas and four Champions League titles, Ronaldo moved to Juventus in 2018.