No Crisis In Ajah, We Raided Black Spots – Lagos Police 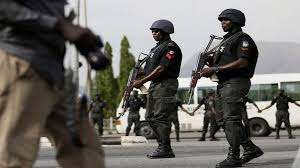 The Lagos State Police Command has debunked reports of crisis in Ajah area of Lagos state.

The command said what happened was that its officers raided some black spots in the area.

There has been report of tension at Imosa Idasho Community in Ibeju Lekki as land grabbers invaded the area and attacked some residents.

But a statement issued by the command’s spokesman Muyiwa Adejobi on Sunday said the command moved into the area this morning to raid some identified black spots.


Adejobi said some people were arrested and that stolen items were recovered.

“No crisis in Ajah area. The command moved into the area this morning to raid some identified black spots.

“We have some suspects arrested and stolen items recovered. Similar thing was carried out in some other parts of the state. Police works continue,” he said.