EndSARS: I Was A Victim Of Police Brutality -Governor Fayemi 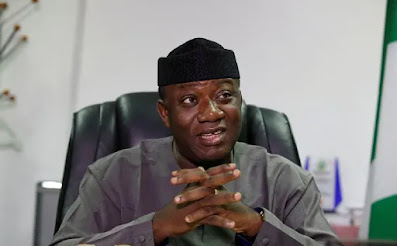 The Governor of Ekiti State, Dr. Kayode Fayemi, on Sunday described the EndSARS protest as a noble course, saying It was supported in Ekiti not because of those involved, but for the reason behind the action.

Fayemi, who disclosed he had been a victim of police brutality in the past, said that he would join other good intentioned Nigerians to take the youth’s EndSARS agitations serious.

This was as the Minister of Trade, Industry and Investment, Chief Adeniyi Adebayo, assured Nigerians that President Muhammadu Buhari would listen and implement all the demands made by the youth during the EndSARS protest.


They spoke in Ado Ekiti on Sunday during an interaction session held by stakeholders’ on the recent #EndSARS protest that resonated panic across the country.

Governor Fayemi said the case of police brutality was one issue that affects every fact of the society, revealing that he was a victim in 2014 while seeking reelection.

Fayemi , who was defeated in the June 21, 2014 election by his predecessor, Mr. Ayodele Fayose, had prior to the election allegedly teargased by a team police operatives at Mugbagba area of Ado Ekiti while some APC governor were prevented from entering the state to campaign for him having been allegedly stopped by security agencies at the borders.

Describing the youths as the engineroom of the nation’s economy, Governor Fayemi stated that there was need for the governments to partner the youth for sustainable peace and development . “The EndSARS protest was a noble course .

It was supported here in Ekiti not because of those involved, but for the reason behind the action which we believe would help the police to put their house in order.

“The youth protest in Ekiti was well intentioned and peaceful. Right to peaceful protest is an inalienable right. For the first time we have panel of inquiries at every level of government to tackle our issues. We must not resort to violence as a solution to our agitations. We must all speak in unison against violence as we did in unison against Police brutality.

“Our youth are angry , because as they were coming out of closure of schools over Coronavirus pandemic , they entered into ASUU strike, then there is hunger in the land and the harsh economic situation in our country. “The government has done many intervention programmes and had proscribed SARS and introduced youth investment fund and many others as a response to the youth agitations.

“I commiserate with the families of those who paid the supreme price. We identify with them. The panels that we set up will look into the reasons behind the protest and how best to address the issues raised, because EndSARS protest had placed a moral burden on all of us that we must be vigilant. “I am a victim of police brutality myself.

You could all recall what happened to me during my election of 2014. But some policemen had also rendered good services to me, so not all of them are bad.

“Our police must be motivated to do well. Policemen must be well remunerated . There must be good motivation for the police to be able to to discharge their duties effectively” .