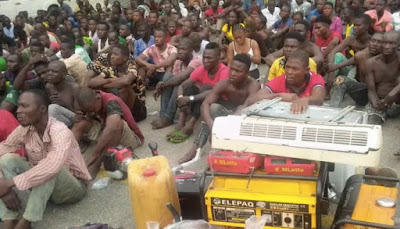 The Lagos State Police Command on Sunday said it arrested 720 suspects from different parts of the state for various offences.

The suspects, who were arrested during a raid on black spots in the state, were allegedly arrested with incriminating items.


The statement read in part, “In the swift operations, police operatives of the command arrested 720 suspects with incriminating items, including locally-made guns and life cartridges, charms, weed suspected to be Indian hemp, substances suspected to be cocaine and some items suspected to have been looted from various shopping outlets within the state during the recent #EndSARS violence.

“The Commissioner of Police, Lagos State, Hakeem Odumosu, who matched his words with actions, had earlier warned and directed police officers and men to move against lawlessness and criminality in Lagos as he affirmed the zeal of the command to sustain the operations, even beyond the yuletide season.”

Adejobi urged residents whose property were looted during the #EndSARS protest to visit the command and claim their items with proof of ownership.    ,,