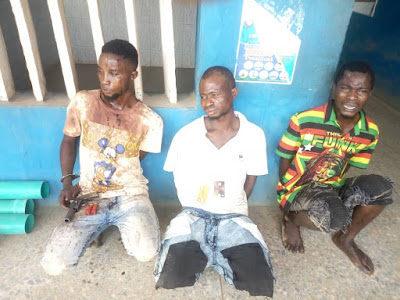 Three men have been arrested by men of the Ogun State police command during a robbery operation in the Iju area of Ado-Odo/Ota Local Government Area.

According to the police, the suspects are “members of a robbery gang who have been terrorising Iju-Ota and its environs for some time.”

The suspects are: Bamidele Oluwashina, 31; Adebowale Kehinde, 32 and Oluwasegun Abayomi. They were arrested on November 12.

Abimbola Oyeyemi, the Ogun State police image maker, said in a statement yesterday that the trio were arrested following a distress call received by the police at Onipanu divisional headquarters around 9:30p.m.

The police, Oyeyemi disclosed, were alerted that robbers had invaded Iju Love bus stop and Tipper Garage, wielding dangerous weapons and dispossessing people of their valuables.

As a result of the information, the DPO of Onipanu division, CSP Bamidele Ishola Job, mobilized his men to the scene and engaged the robbers in a gun duel.