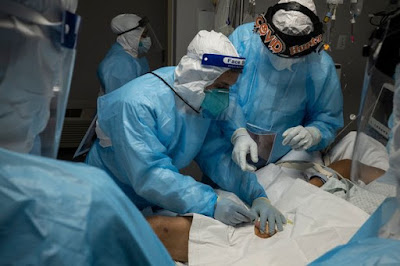 The US has hit another grim milestone in the fight against coronavirus as 11 million Americans have now been infected by the deadly disease - and one million of those in the last week alone.

Infection rates are soaring and the country's death toll - by far the worst in the world - is approaching 250,000.

Instead he's sticking to his beloved golf course - where he was pictured again on Sunday - and tweeting baseless conspiracy theories about how the election was "stolen" from him.


The most recent surge in cases started last month, as it only took a fortnight to go from eight million cases to nine, then 10 days for the next million and eight for the million after that.

Biden's top advisers have called for urgent action to address the pandemic, warning Trump's refusal to begin a transition of power could further hinder the battle against the rampaging virus.

"We are in a very dangerous period," Dr Michael Osterholm, a member of Biden's COVID-19 Advisory Board and director of the University of Minnesota's Center for Infectious Disease Research and Policy said.

Unless action is taken now, "we're going to see these numbers grow substantially", Osterholm warned, adding "our future's in our hands."