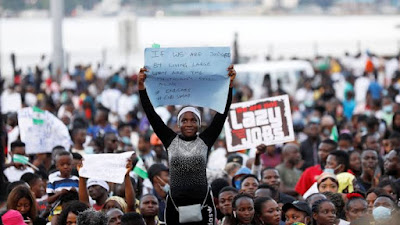 The federal government has finally released official figures of Nigerians killed in the violence that occurred after the EndSARS protest went awry.

Minister of Information, Lai Mohammed, provided the details on Thursday.

He accused CNN of looking the other way even though civilians and security operatives died during the civil disorder.

“In its jaundiced reporting, CNN was blind to the fact that six soldiers and 37 policemen were killed in unprovoked attacks.”

Mohammed said despite arresting hordes of looters during the violence in Lagos, the Army counseled and treated them humanely before hand over to the police.

He stressed that the same cannot be said of those that killed security personnel in a barbaric manner.

“Six soldiers and 37 policemen were killed all over the country during the crisis. This is in addition to 196 policemen who were injured; 164 police vehicles that were destroyed and 134 police stations that were razed.”

Mohammed lambasted human rights organizations, adding that they became suspect after “ignoring” the murder of law enforcement officers during the crisis.

Mohammed said they did not see anything wrong in the public and private properties that were burnt or looted.

The minister noted that all they could see in their “biased view” of the whole situation was a “hoax massacre”.