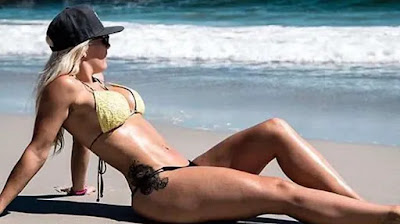 Leanne Carr, the British police sergeant who requested sick leave from the force and then proceeded to post on Instagram a stampede of racy photos of her bodacious body in far-flung vacation locales around the world, has resigned from the force, The Sun reports.

An Instagram obsessed, busty blonde, Leanne Carr became the official “poster girl” for the Lincolnshire Police during her 14-year tenure.

Instead of taking responsibility for her extraordinary acts of deceit, she has blamed “bullying” colleagues for ending her career as a cop.

Leanne Carr, 34, ditched her post in the police force in 2017 to take a worldwide journey and assiduously document her good times on Instagram.


The 35-year-old sparked controversy in 2018 when glamorous shots emerged of her seven months’ travelling in Thailand, Cyprus, Austria and South Africa when she was on long-term sick leave.

Others featured her luxuriating on sandy beaches.

Leanne Car wasn’t exactly attentive to her police work when she returned to the job either. The Instagram-happy blonde was caught playing online video games for cash while exposing her impressive cleavage, all while she should’ve been working.

The fallen cop took to social media to blame others for her professional demise, the Daily Star reports.

Writing to her significant Instagram following, Leanne said: “Bullying, harassment and victimisation is not okay. Not on any level.”

“After 14 years service as a Police Constable, Police Sergeant and Police Inspector I am immensely proud of myself,” Leanne Carr said on Instagram.

“I achieved that through hard work, determination, sacrifices and a love for serving the public.”

Passing the buck, Carr then said, “Sadly I’ve had to close the door to the negativity I’ve endured from my colleagues for my own sanity and to protect my own mental health.”

Leanne Carr made clear on Instagram that she has only begun to do battle with her former police colleagues, the Daily Mail reports.

And she makes it clear her fight with the boys in blue is not over, and invites other disaffected officers to contact her, saying ‘my inbox is always open’.

Carr reportedly suffered a stress-driven health problem three years ago after she was the subject of an internal misconduct investigation.