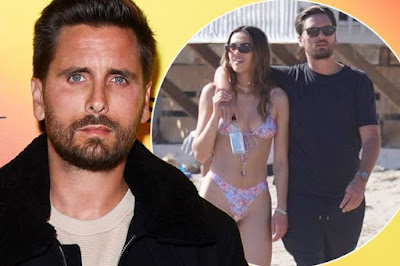 Scott Disick 's new romance with model Amelia Hamlin has been branded "weird" thanks to their 18-year age gap.

While many think that age is just a number, some people have taken to social media to express concern over the relationship blossoming between Kourtney Kardashian's ex and actors Harry Hamlin and Lisa Rinna's daughter.

Real Housewives of Beverly Hills star Lisa, 57, is friends with Keeping Up With The Kardashians momager Kris Jenner, and is said to be worried about her daughter dating Scott, who shares three kids with ex Kourtney.

Sources say Lisa isn't going to acknowledge the romance publicly, at least for a while because she's still trying to get her head around it.

It's also reported that Scott's ex Sofia Richie, 22, unfollowed Amelia on Instagram after finding out about the relationship.

On Twitter, people didn't hold back with their opinions.

Another suggested it was all for the show, tweeting: "Can’t believe Scott disick’s grafting Amelia Hamlin They really know how to pull stunts with Kourtney purely for the show"

"WTF is Amelia doing with Scott Disick," another penned.

A third suggested that things between Scott and Amelia were getting serious, given that he'd already met her sister Delilah and her boyfriend, Love Island's Eyal Booker.

They wrote: "Eyal is currently dating Delilah Hamlin. The 19 year old Scott has been hanging out with is her younger sister Amelia . This means Amelia and Scott are serious enough that he has met her sister and her boyfriend. Scott Disick is the grossest human alive and this is a weird take"

They had shared a tweet from someone else, laughing about Megan Barton-Hanson posting the DM she'd received from Scott.

Megan posted the exchange writing: "Its not often I'm left speechless but.. sorry!? What have I just read? Genuinely a little concerned about Scott tho".

He had slid into her DMs on Instagram saying he had recently watched her on Love Island and had some questions for her if she was willing to chat to him.

He shocked her by firing back: "i was recently introduced to a beautiful man, named eyal. when i went to see what he's done on tv, i was astonished by your behavior. to find you mugging him off, and taking full advantage of his unbelievably beautiful sense of humor, and vulnerability.

"i'm extremely disturbed that anybody could be so disrespectful to somebody for no good reason. i would like to know if you'd be willing to write an apology.

"the fact that you told him he wasn't funny - when in fact, you and not jim Carey is absurd."

Another Kardashians fan posted: "Scott Disick’s 8 year old daughter is closer in age to Amelia Hamlin than he is..."

One wrote: "Also reminder that all 3 of Scott Disick’s CHILDREN including the youngest Reign who is 5 years old, are close in age to his 19 year old gf/fling Amelia Gray Hamlin than he is at 37 years of age, this is f**ked up and gross"

And one penned: "Is anyone going to talk about the fact Amelia gray is still a teenager and scott disick is 37"

However, not everyone felt that way, and pointed out that it wasn't the first age-gap relationship in the family.