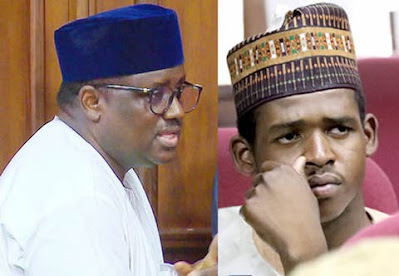 The Federal High Court in Abuja, on Tuesday, issued a warrant for the arrest of son of former Chairman of Pension Reform Task Team, Abdulrasheed Maina, Faisal, following his refusal to appear for continuation of his trial on money laundering charges.

The court equally summoned the member representing Kaura-Namoda Federal Constituency, Umar Dangaladima, to appear before it on Wednesday to show cause why he should not be remanded in custody or made to forfeit N60million bail bond on the head of the Defendant, to the Federal Government.


Relying on section 352 (4) of the Administration of Criminal Justice Act, 2015, Justice Abang gave the Economic and Financial Crimes Commission, EFCC, the nod to prosecute Maina’s son in absentia.

The orders followed an application the EFCC made through its lawyer, Mr Abubakar Mohammed. The prosecuting counsel had at the resumed proceeding in the matter on Tuesday, drew attention of the court to the absence of both the Defendant and his lawyers. Mohammed noted that Faisal had since June 24, failed to appear before the court for continuation of his trial.

He therefore urged the court to revoke the bail it earlier granted the Defendant, and order his trial in absentia. EFCC equally urged the court to issue a warrant for the arrest of the Defendant, pursuant to section 184 of the ACJA, 2015. After he had listened to the prosecuting counsel, trial Justice Abang held that the application deserved to succeed. The court said it was satisfied that the Defendant has jumped bail, having repeatedly failed to appear for his trial. The warrant of arrest against Faisal came barely six days after the court also issued a similar order for against his father who is also answering to a 12-count money laundering charge.