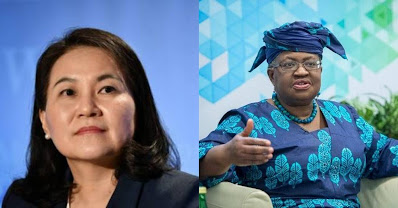 South Korea appears to have decided to withdraw its trade minister, Yoo Myung-hee, from the race for the World Trade Organisation (WTO) Director General, paving the way for Nigeria’s candidate, Dr. Ngozi Okonjo-Iweala, to be confirmed as the head of the global trade body.

Washington Trade Daily (WTD) quoted people familiar with the development to have disclosed South Korea was expected to announce its decision to withdraw Myung-hee in the coming days to enable the WTO’s General Council appoint Okonjo-Iweala.

The Washington-based news medium further stated that South Korea had already conveyed its decision to the United States, which had been insisting on the selection of Myung-hee.


Part of the reason for the position adopted by the United States against Okonjo-Iweala, is that she is perceived to be close to the Democratic Party, according to the WTD.

The WTO had scheduled a General Council meeting for November 9, which was postponed after the Geneva Canton imposed new restrictions on meetings in the face of the sudden surge in Covid-19 cases. Most of the WTO meetings are largely being held virtually through internet platforms. In order to take decisions by the General Council, a quorum of 82 members must be present at the meeting.

A General Council meeting has been scheduled to take place on December 17, but it is not clear whether the meeting can take place if the current restrictions continue next month.