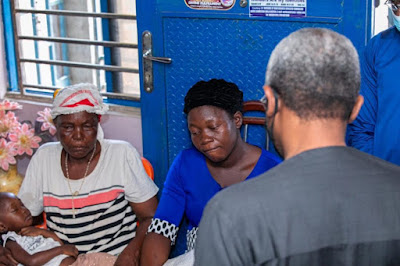 The widow of Ifeanyi Okereke, the Newspaper Vendor shot dead by Security detail attached to Speaker of the House of Representatives, Mrs. Josephine Okereke has dissociated herself from the N500m being demanded from the Speaker as compensation for the death of her husband.

Ifeanyi Okereke was shot dead by an Operative of the Department of State Services while the Speaker has given assurance that the wife and children of the late vendor will be adequately taken care of while his family will get adequate Justice.

However, the family of late vendor wrote to the Speaker through their lawyer, Chief Mike Ozekhome (SAN), demanding for N500m as compensation.


Chief Mike Ozekhome (SAN), had in a letter dated November 23, 2020, said he was given the mandate to write the Speaker by the father of the deceased, Okorie Okereke; and his younger brother, Destiny Okereke.

However, speaking at a news conference on Thursday in Abuja, the widow of the deceased said that none of the family members informed or sought her consent before embarking on any action

While expressing gratitude to the Speaker for all steps taken so far since the unfortunate incident, she acknowledge the fact that nothing could bring her deceased husband back to life,

According to her, ” I got to know about the said N500m demand as compensation on the killing of my husband through the media, nobody told me before embarking on that, the Speaker visited us and assured us that justice would be done which is what am after and not monetary compensation.

“The Speaker also made promises to take care of the welfare and the well-being of the immediate family of my late husband and to institute a Trust Fund in his name, we are just looking up to him for the fulfillment of his promises and not fighting the man.”