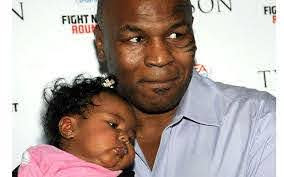 Mike Tyson is to step into the boxing ring for the first time in 15 years when he takes on Roy Jones Jr.

The 54-year-old, who was once dubbed 'the baddest man on the planet' has undergone a dramatic transformation to get back into fighting shape.

The two men - who never met in their prime - were originally due to fight in September but the fight was pushed back two months to allow them more time to prepare.

Despite a lack of fans in the stadium due to the coronavirus pandemic, millions are expected to watch the exhibition match on television.


At the peak of his fame, Tyson reportedly made £300million from his must-watch boxing bouts and lucrative sponsorship deals.

He was just 20 when he became the youngest ever boxer to win the heavyweight title before going on to win the WBA, WBC and IBF titles.

Tyson is still the only heavyweight boxer to have unified them.

Despite his success in the ring, the 54-year-old's life has also been mired in controversy.

Growing up in one of New York's toughest neighbourhoods, the boxer lost his mother when he was just 16 and was taken in by his boxing trainer.

After competing in the Junior Olympic Games, Tyson turned professional when he was 18 and won his first title just a year later.

He become world heavyweight champion just 12 months after that and inside the ring, he seemed unstoppable.

Huge firms, like Nintendo, were keen to get his face on their products and games and Mike Tyson was one of the most famous men in the planet.

But as his star continued to rise, huge cracks were starting to show in Tyson's personal life.

He was married to actress, Robin Givens, but just a year after they wed the relationship had crumbled.

There were rumours of violence and domestic abuse and in a bombshell interview, with her husband sitting next to her, Givens described life with the boxer as "torture, pure hell, worse than anything I could possibly imagine".

She claimed her husband was a manic depressive and just a month later, she filed for divorce.

Three years after his marriage broke down, Tyson was arrested on suspicion of rape. He was accused of assaulting an 18-year-old woman in a hotel room.

On February 10, 1992, Tyson was convicted of rape and jailed for six years but was released in 1995 after serving less than three years of his sentence.

Against all the odds, the boxer launched an audacious come back and was soon the king of the ring once again.

He also found love again with Monica Turner, a Washington doctor, but in 2003 she filed for divorce, saying he had been unfaithful.

But where Tyson led, controversy followed close behind and in 1997 during his bout with Evander Holyfield the sport witnessed one of the most shocking incidents in its history.

The fight had to be stopped at the end of the third round after Tyson bit Holyfield on both ears, with one bite so severe it took off part of his opponents ear, which was later found on the floor of the boxing ring.

Even so, Tyson stayed in boxing, being beaten by Brit Lennox Lewis in 2002 and, despite his vast earning power, having to file for bankruptcy in 2003.

In 2005, the heavyweight stunned the boxing world by announcing his retirement.

Four years later, father-of-seven Tyson's world was shattered when his four-year-old daughter, Exodus, died in a horrifying and tragic accident.

The little girl's body was found by her seven-year-old sibling at their home in Phoenix, Arizona.

She was discovered on the treadmill and it appeared she had been strangled by a cord attached to the machine.

Sgt Andy Hill from the Phoenix Police Department said at the time: "We believe the child was on the treadmill but it was not running at the time. She might have been playing like it was."

Exodus was rushed to hospital, where she was placed on life support, and Tyson, who was in Los Angeles at the time, rushed to be at his little girl's bedside.

But there was nothing that could be done and Exodus passed away on May 25, 2009.

Tyson gave an emotional interview following her death where he admitted his initial reaction had been to "get my gun, automatic just like this and go crazy".

However, he realised other parents were going through the same heartbreaking experience as he was when he arrived at the hospital.

But he admits he "couldn't handle" what had happened.

Before the interview was abruptly stopped, Tyson said: "I did some cocaine for a week, I had to get high, I couldn’t handle it at all."

Tyson will be back in the ring on Saturday.