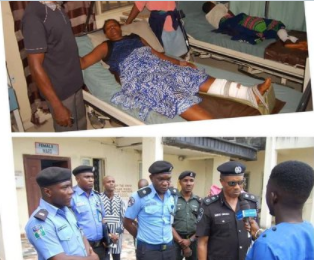 There was pandemonium on Tuesday at the Edepie suburb of Yenagoa, Bayelsa State capital when one of the policemen on an escort duty fired indiscriminately hitting a 17-year-old girl, a pastor’s wife and a trader along the popular Tombia market area.

The road leading to the Edepie roundabout from the Tombia end is home to the popular Tombia market and motor parks and is notorious for its daily gridlock caused by traders infringing on the right of way of motorists and other road users.

The incident, it was gathered, occurred Tuesday night and the victims were identified as Alice Azaghene aged 17, one Mrs Ebinipiri J. Onojamadu aged 46 and Madufuro Blessing aged 32.

According to an eyewitness, the armed policemen, about six in number, on getting stuck in the traffic reportedly went down from their vehicle and started shooting ostensibly to clear the way free passage for vehicles.

It was gathered that when the traders refused to leave the road, one of the policemen got infuriated and fired gunshots at the traders and passersby, hitting the victims.

The quick visit of the State Commissioner of Police, Mike Okoli, to the scene of the shooting and arrest of the trigger-happy police team, was said to have calmed frayed nerves as some youths were already chatting “#End Police Brutality.”

Another eyewitness, Joy Robert, said: “The police van was packed along the Melford Okilo road by Tombia roundabout. Before we knew what was happening, the policeman started pointing his gun at the women, ordering them to move out of the way. Because the women hesitated to move out of their way, he started shooting the ground.

“I thought I had been shot but I heard my mom screaming that she could not move her legs. It was at that point I realized that she had been shot on her leg. So, some persons came to our rescue after the police van had left the scene, driving towards Amassoma but I was able to write the number of the van down.

“If they line up the policemen, I could identify them. All I want is justice for my foster mother.

As we speak, the hospital is already saying that if we don’t pay an advance fee, they would discharge my mother from the hospital.”