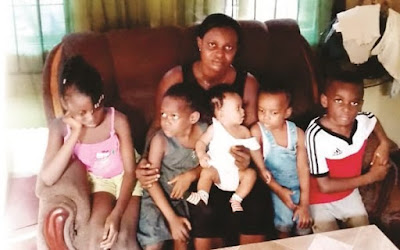 Onyinyechi Osuigwe, a 25-year-old mother of five, whose husband was allegedly killed by a soldier during the recent nationwide ENDSARS protests, has called on the government to fish out the killer of their breadwinner.

The nursing mother and resident of 17B, Ndiuche Street by Ngwa Road, Aba South Local Government Area, Abia State, says she is left to wonder how to carry on with the task of looking after their five children without her husband.

Neighbours are also worried and upset that the deceased 35-year-old man, Ebere Osuigwe, was not even taking part in the protest when he was felled by the solider’s bullets.

Osuigwe was said to have left his residence in the morning of Friday, October 23 for his family’s home at Osuigwe Lane, Ngwa Road, Aba in search of electricity to charge his phone so that he could communicate with other relations and friends in his home town at Umueze Amigbo in Nwangele Local Government Area, Imo State when tragedy struck.


He was said to have met some soldiers in a patrol vehicle who halted him as he was returning home to find out where he was coming from. Osuigwe was said to have raised his two hands up in a gesture of surrender and told the security personnel that he only went to charge his phone and was going back to meet his wife and children.

Refusing to accept his explanation, a trigger-happy soldier was said to have shot him in the ankle. But apparently feeling that he did not hit his target well, the soldier opened fire again, hitting Osuigwe the laps at very close range.

Expressing her shock in a chat with our correspondent, Osuigwe’s widow, Onyinyechi, said: “I am sad the way they brutally shot my husband and left him to bleed to death.”

Continuing, she said: “On that fateful day, there was no electricity and all our phone batteries were down. My husband said he needed to charge them to be able to communicate with his people to know what was going on with the ENDSARS protest.

“I told him to be careful and he assured me that he would come back immediately. After bathing and feeding the kids, I kept our food, waiting for him to come back for us to eat.

“After waiting for a long time, I called him with a neighbour’s phone several times but he was not picking his calls.

“I became worried because usually, no matter where he was, once he saw my call, he would call back to know why I was calling him.

“I went outside and sat down and later decided to go and check him around 11 am. With fear in my heart, I went to the place where he said he was going to charge his phone.

“On getting there, I saw some kids and asked them what happened. They said their brother, Ebere, had been shot dead. I was shocked and started shouting like a mad person.”

Amis sobs, she added: “Things have not been easy for me since he died. It is my landlord’s wife that has been feeding my children and forcing me to eat.”

She recalled that she had dropped her job as a seamstress on account of childbirth and was waiting to go back to work next year, after weaning her five-month-old child.

She urged the Federal Government to fish out the soldier that killed her husband and also help in training the five kids (four girls and a boy) her husband left behind.

Narrating what happened at the family lane, Osuigwe’s elder sister, Benedicta(42), said: “My brother had plugged the phone and later came back to collect it.

“On his way coming back, there is a street opposite Diamond Bank and the street was named after our surname. It is a small lane called Osuigwe Lane.

“He was on this lane when he saw the soldiers and one of them rushed towards him and asked where he was coming from. Ebere (Osuigwe) surrendered by raising his two hands up and told them that he went to charge his phone and now going back to meet his family, and that he was a family man.

“After shooting him, he waited there and watched my brother bleed to death. They then left him and neighbours carried him in a wheel barrow down to the town, looking for a keke (tricycle) or vehicle to take him to the hospital while he was still bleeding.”

According to Benedicta, by the time Osuigwe was taken to one Christiana Christian Hospital, the hospital checked him and certified him dead.

She continued: “My people doubted it and we were referred to St. Anthony Hospital, Aba. That was where another doctor confirmed him dead. He is in the mortuary now.”

Benedicta described the late Osuigwe as a good man who could not hurt a fly.

She said: “My brother was not a bad man. He was not a cultist. He does not smoke or drink and was not part of the protesters. They just killed him.

“If you watch the distance from where he was killed to the bank, you will see that the soldiers intentionally killed an innocent soul.

“While this was happening, people were inside their houses peeping at the scenario. I feel bad because a similar thing happened to the family in 2017.”

She recalled how another younger brother of hers, Ikechukwu Osuigwe, a member of the (Bakassi) Vigilante Service of Abia State, was returning from Umuahia in company of other members of the vigilante group when on the Aba-Owerri Road, kidnappers shot and killed eight of them, “and the state government did not do anything. He left a wife and two kids, and this has come up again.”

She said: “I want those who killed Ebere to be brought to justice. And let the government compensate the family, as he has five kids and I don’t know how I am going to cater for them. Let them come and kill me too.

“I called the police to inform them but nothing was heard from them again.”

Also, an eyewitness and a neighbor at the family house, who spoke on condition of anonymity, said: “I was in the same street with him until I left to charge my phone at a nearby chemist shop. After some time, we heard gunshots and everybody ran inside the house.

“A little while, we saw some army men who came out from where Ebere was shot and started chasing people. After they left, people came out to hear that somebody was killed in front of my shop.

“We all came out to see that our neigbhour, Ebere had been shot. A man removed his shirt and tied the wound and we all started looking for a way to take him to the hospital.

“He was carried in a wheel barrow to the main road and transferred into a keke that took him to the hospital.”

Speaking also, the deceased’s mother, Bessy Osuigwe (55), a widow who sells firewood, said since the death of her son, she had been down with high blood pressure.

“I cry everyday because my son did not do anything. He went to charge his phone when a fellow young man caught him. He was pleading but his captor refused and shot him dead.

“I don’t know what to do next and I don’t know how I am going to cater for the five kids he left behind. How am I going to train these kids as I am not healthy now?”

“I want the Federal Government to fish out that soldier that killed my son and know how to deal with the soldier. They kill and carry people’s corpses, but my son was shot and left to die. They did not carry his corpse.

“My son is innocent. Why did the soldier kill him and leave five kids that I don’t know how to train?”