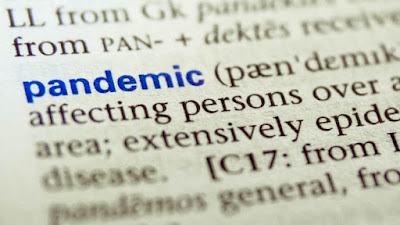 In what would have been unthinkable a year ago to what seems like a fairly obvious choice now, Merriam-Webster announced on Monday that its Word of the Year is “pandemic.”

“Sometimes a single word defines an era, and it’s fitting that in this exceptional -- and exceptionally difficult -- year, a single word came immediately to the fore as we examined the data that determines what our Word of the Year will be,” Merriam-Webster said in its announcement.

According to the publishing company, the first big spike for people looking up the word “pandemic” happened on Feb. 3 -- the same day that the first COVID-19 patient was released from a Seattle hospital -- when searches for the word skyrocketed by 1,621% more compared to the same time the year before.


Searches for the word, however, according to Merriam-Webster, had actually been slowly increasing since Jan. 20 -- the same day as the first positive case of COVID-19 occurred in the U.S.

“People were clearly paying attention to the news and to early descriptions of the nature of this disease,” the publishing company said. “That initial February spike in lookups didn’t fall off -- it grew. By early March, the word was being looked up an average of 4,000% over 2019 levels. As news coverage continued, alarm among the public was rising.”

The company said that the single largest spike in searches for the word “pandemic” happened -- perhaps unsurprisingly -- on March 11 when the World Health Organization officially declared “COVID-19 can be characterized as a pandemic.”