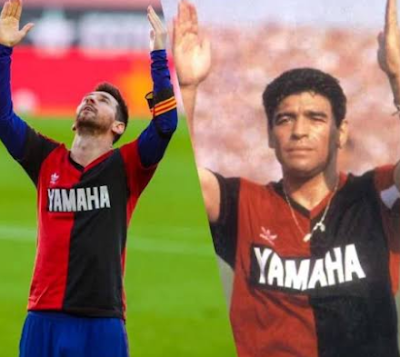 Barcelona will have to pay a €3,000 fine, after captain Lionel Messi paid tribute to Diego Maradona, by celebrating in a Newell’s Old Boys shirt on Sunday, SportsMail reports.

Messi celebrated his goal against Osasuna, by taking off Barcelona’s blue-and-burgundy strip to reveal the red-and-black of Newell’s.

Maradona, who passed away last week at the age of 60, played for Newell’s at the end of his glittering career.

Messi also wore the same shirt at the start of his career, making it a fitting tribute.


But the emotional tribute was against the rules of the Royal Spanish Football Federation, who are now poised to fine Barca for Messi’s celebration.

After the game, Messi posted a photo of his tribute alongside an older image of Maradona in the same shirt, adding the message “Farewell, Diego” in Spanish.