Diego Maradona Fell And Hit His Head Before He Died And Was Then Left Alone ‘without Help’ For 3 Days, His Nurse Claims 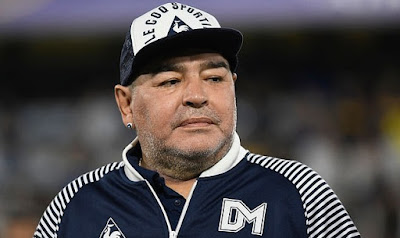 Diego Maradona fell and hit his head a week before he died - and was left alone for three days "without help", his nurse has reportedly claimed.

The Argentinian football legend, 60, passed away from "chronic heart failure" at his home in Buenos Aires last week.

But, with police probing his death over allegations of medical negligence, a lawyer for his nurse reportedly said he hit his head during a fall in his house.

According to local media, the World Cup winner was not taken to hospital or given an MRI scan for the bump on the right side of his skull.


At the time, he was recovering from brain surgery which removed a clot on the left side of his head and was receiving round-the-clock care.

A lawyer for Gisela Madrid, the star's nurse, reportedly said: "Maradona fell on the Wednesday of the week before his death.

"He fell and hit his head, but they didn't take him to the hospital for an MRI or CT scan …"

Attorney Rodolfo Baquè also claimed the former Barcelona and Napoli playmaker was left alone for three days after the tumble.

He said: "Maradona was unable to decide anything - after the fall he was left alone for three days in his room, without being seen by anyone and without being helped."

On Saturday, it emerged that the iconic sportsman's nurse admitted she lied about an early-morning check-up on him.

The sensational confession added more mystery to the circumstances surrounding his untimely death.

Initial reports pointed to a 24-year-old nephew, who was living with him, being the last person to see him alive over breakfast the day he died.

He was said to have told his relative: “I’m not feeling well” before going back to bed and dying in his sleep.

However, investigators have now been told he never got up on Wednesday to eat anything.

Police found a late-night sandwich lying uneaten in Maradona's bedroom when he was discovered dead.

One night-shift nurse told cops she had seen the star "sleeping and breathing normally in bed" at around 6.30am on the morning of his death.

She then claimed she saw him alive at 9.20am - however the medic has now admitted she never went into the footballer's room and that she was "made to lie", local media reports.

It is not clear why the woman - who works for private medical firm Medidom - lied under oath.

Two of the star's daughters Dalma and Giannina have told police they suspected the medication their father was given was not appropriate.

And at the weekend, Maradona personal doctor Leopoldo Luque had his office and home raided by cops amid reports the death is being treated as manslaughter.

On Sunday, following the 40-minute search on his home, Dr Luque, a neurosurgeon, said he did "everything he could, up to the impossible" and considered himself a "friend" of Maradona.

He also revealed Maradona was battling addiction problems when he died.

During an emotional statement, the doctor said the footballer had issues with pills and booze, adding: "He punished himself in a way I wasn’t going to allow, not as a doctor but as a friend.

Dr Luque said Maradona looked "very down" in the days leading up to his death and should have gone to rehab following the op.

"He should have gone to a rehabilitation centre. He didn't want to," he said, describing Maradona as "unmanageable".

"I am the person who has been taking care of him. I'm proud of everything I've done. I have nothing to hide. I am at the disposal of justice," he added.